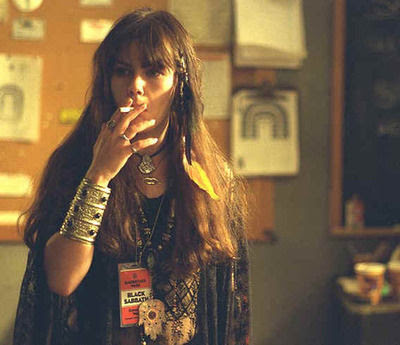 "They don’t even know what it is to be a fan, y’know? To truly love some silly little piece of music, or some band, so much that it hurts.” - Sapphire (Almost Famous)

Not so long ago I read this post (and another one) on the blog So You Want To Be a Rock'n'Roll Star? and instantly knew that those posts were also about me. I felt like they were written by me. Really. And after reading both of them, I decided to write a post to express my opinion too.
I think nowadays it's not easy at all being a real rock fan (especially if you are a girl). People just exclude you because you are the different one, the girl who listen to that strange and old kind of music. Just because rock girls like me have a relationship with music which is very different from the one our school mates have.

When I am with other girls, they simply talk about how they'd love to marry and roger Zayn Malik of One Direction (or the singer in vogue), while I think how it would be perfect if I went to Pete Townshend's house and played a song with him and Rachel Fuller.
When I speak on the phone with a friend of mine and she says she bought a perfume or a nail polish or a purse, I always get bored. If she asks me if I bought something and then I say LPs and CDs, she exclaims expressing disgust. Other girls that I know can't understand how I feel happy when I buy a record or anything related to rock music. As for fashion, I don't like today's one at all, vintage fashion is the only one that matters to me.
But the thing I really can't stand about our era is the music. Nobody listens to music to find a meaning which is important to us or poetic lyrics. Today's music (and for today's music I mean pop and commercial music) is only for dancing and feeling cool, but in my opinion that kind of music doesn't deserve to be listened. We rock girls are very faithful to our favourite band because that changed our lives and gives us the creeps even if it's 38°C outside. I think there is a special bond between us and rock musicians, something like an understanding.
Other girls listen to that band in vogue for a month and when it's out of fashion they forget it and listen to another one. It's the same for the songs. None of them will remain immortal during the time because they aren't influential. Nobody is inspired by them. After a few months people just forget them and remove them from their mobile phones or iPods because they aren't cool anymore.

But it doesn't go for me. After all, music is your only friend until the end...

And no, rock'n'roll is NOT dead! Because you can't kill something that is immortal.

Posted by Francesca at 3:58 PM

Email ThisBlogThis!Share to TwitterShare to FacebookShare to Pinterest
Labels: me