Dandelion: Memoir of a Free Spirit by Catherine James 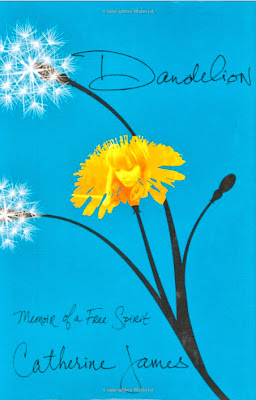 Dandelion: Memoir of a Free Spirit is the autobiography of Catherine James, a groupie and model in the Sixties and Seventies.
She was born in Los Angeles in 1950 when her parents were in a very stormy relationship, which led to a separation. During her childhood, Catherine was treated like a slave by her mother and her subsequent boyfriends. At the age of thirteen, she escaped from home but was found by the police, that sent her to a teen prison. But her life changed completely when she met Bob Dylan on a weekend. He gave her his address in New York and Catherine decided to escape to New York. There she began to hang out with rock stars and other famous people. In 1967 she had a son, Damian, by Denny Laine who Catherine then left because of his moody and jealous behaviour. By then she continued having a lot of adventures with her child and dating rock stars and in 1973 she started her career as a model. By the Eighties she had a calmer life and had several relationships with men she thought were the perfect ones (but weren't). And during the narration the subject of her family is almost always present.

I found this book really interesting, but don't expect it to be an autobiography where you'll just read about Catherine's dates with rock stars and the Swingin' Sixties. That didn't disappoint me (reading about the rest of her life was good too), but maybe I expected something more from it. In fact in this book every part of Catherine's life has the same importance as the others and I wish she had written more about her life in the Sixties and modeling career and had described less her constant change of job, short marriages and break-ups (these three things happened four times and every time was basically like the previous, which made this part of the book less interesting). But I think Catherine did it because she wants to portray herself as a woman who fought and overcame every difficulty and managed to have a good life in spite of everything, rather than a girl who just dated many famous rock stars.
Anyway, her description of her life in the Sixties and with rock stars is really amazing and worth it. Catherine is really good at creating a wish for the most appealing decade of the past century in the reader's mind. And I'm sure that, despite her hard times, at some point you'll hear yourself whispering: "I wish I was her...". Well, who wouldn't?

A fantastic book which everyone would be glad to find under their Christmas tree.


Buy at Amazon.com | Amazon.co.uk
Posted by Francesca at 7:02 PM